Can You Steal Your Own Job Away? (Turns Out, Yes. Yes, You Can.) 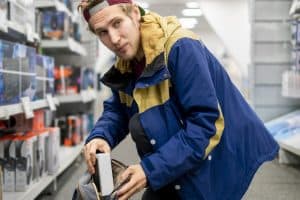 You all know just how much I love my job. There are days when the work is a challenge, and the cases can be gut-wrenching. But there are other times when I can’t help but laugh.

Radio station King FM in Wyoming has given me an excellent reason to giggle today.

Police arrested a man for shoplifting from the Sportsman’s Warehouse. He had stolen some sunglasses and bullets from the store.

He wasn’t arrested at the time of the theft, though. He was arrested later when, for some strange reason, he returned to the store to fill out a job application. After filling out the application, the job applicant tried to steal a few more pairs of sunglasses. According the Gillette New Record, the man was charged with several thefts. For some reason the suspect’s name wasn’t made available – even though it’s a good bet it was on the job application. In other bad luck for the defendant, it’s likely the theft conviction will mean he won’t be accepted for the job.

Shoplifting is categorized as a theft in Maryland. In this day and age, when most stores have security cameras, it’s a good bet that if someone walks out of a store without paying for merchandise or even hiding it in a bag while in the store, that person will be charged with shoplifting.

Theft crimes are based on the value of the item taken. Even items worth less than $100 can result in 90 days in jail and $500 in fines – plus the need to return or pay for the item(s) taken. Items valued at more than $1,000 are classified as felonies which can result in years in jail and fines of more $10,000 or more.

A major defense in shoplifting crimes is showing that the items should have been valued for much less. The video may not properly identify the defendant. In some cases, defendants can justifiably argue they were just trying on the clothes and weren’t shoplifting.

At Drew Cochran, Attorney at Law, we have nearly 20 years of experienced fighting for people accused of crimes. Many of our clients made mistakes. The question is often whether they should be criminally punished for those mistakes or whether other remedies such as education are the better approach. For help with any criminal case, call my law firm – Drew Cochran, Attorney at Law – at  410.777.8103, or complete my contact form to arrange a time to meet at my office.