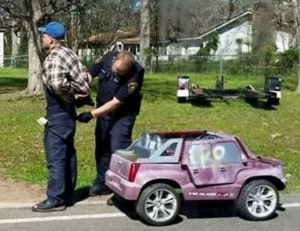 (The trunk only fits a case of minis)

So, technically, here are the things you could get arrested for DUI for operating under the influence:

These are the “standard” ones, but there are other states with even more bizarre laws. In Colorado, you can get a DUI for riding a horse while drunk. Alaskan troopers can arrest you if you’re drunk on an inflatable raft. NJ cops can give passengers a DUI if they let a drunk driver behind the wheel. Heck, even Norway has laws against people riding around on Segways while they’re above the limit.

Maryland has no tolerance for alleged drunk drivers. (We’ll come back to the “alleged” in a minute.) If you get convicted, you’re looking at fines and surcharges, the loss of your license, increased insurance premiums, and the cost (and hassle) of installing an ignition interlock system in your car. If you’re busted for a second (or third, or fourth, or 12th) time, you’re in even hotter water: repeat offenders can spend time in jail, have their licenses revoked for good, and face thousands of dollars in fines.

BUT – this only happens if you get convicted. Maryland law enforcement uses some pretty slick moves when it comes to charging drivers with DUIs. That’s why I used the word “alleged” earlier: an aggressive and proactive defense can help you avoid being convicted (and all the penalties that go along with that) by poking holes in the case against you.

If you’ve been charged with a DUI in Maryland, don’t panic: I’m an experienced Annapolis DUI defense attorney, and I want to help. You can contact the office of Drew Cochran, Attorney at Law, by calling 410-777-8103 or by filling out this contact form.