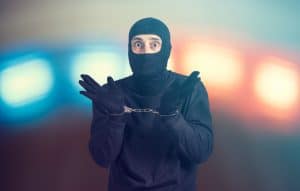 Imagine you and your buddy decide you’re gonna hold up a bar, like a pair of old-timey crooks. You put on your masks, walk into Monaghan’s Pub on Gwynn Oak, and demand money from the carryout register. You and your friend take off running, thinking you’ve finally made it, only to be caught by the off-duty cops celebrating at the very same bar you just robbed.

Only in Baltimore, kids.

As the bar owner told the Baltimore Sun, “he was surprised that someone would commit a robbery at his business, which is just across from a precinct station. During shift changes, he said, there are a lot of squad cars coming and going into the station, and he said many of the officers are regular customers. ‘It’s kind of odd you would even attempt it,’ Milani said. ‘[Officers] are always in here. There was a decent amount of them.’”

As a general rule, don’t rob people. Aside from being illegal, it’s also rude. You shouldn’t take things that aren’t yours. But if you’re going to break the law, maybe do your research, hm? A cop bar – located across the street from the station – is poor planning at best, and downright foolishness at worst.

Robbery is no joke; in Maryland, it’s considered a crime against a person (as opposed to burglary or shoplifting, which are crimes against property). It’s also considered s violent crime. The two men in this story are charged with armed robbery (along with “theft and related offenses,” per Cpl. Shawn Vinson of the BCPD), a felony crime. If they are convicted, they could serve up to 20 years in prison for their actions. The article didn’t say whether or not the accused were carrying guns, but if they were, they could face additional incarceration time for the weapons alone.

Normally, there are ways of fighting robbery charges, but I have to be honest – this looks like a tough case. There were cops all over that bar, so there are witnesses for the intention. They accused left the building with the money and ran, so there’s evidence that the property was possessed by another person (the bar) when the robbery occurred. There could be a way to plea to lesser charges if the person behind the carryout register didn’t feel a threat of harm, or if the robbers didn’t use a show of force, but that information isn’t really clear from the Sun article.

In short, this is one of those cases where it seems like an outright acquittal won’t be possible – but in my line of work, you never say never. The paper didn’t report all of the details, after all, so there could be a lot more behind what we’re all seeing. Let’s hope these guys have a great criminal defense lawyer (hint, hint) to help them.

Robbery charges require serious defense. At Drew Cochran, Attorney at Law, my team and I are equipped to tackle even the most complex cases. To speak with an experienced Annapolis robbery defense lawyer, or to schedule an appointment, please call 410-271-1892 or fill out this contact form.