Don’t Go Out to Eat. Maybe Don’t Ever Leave Your House. 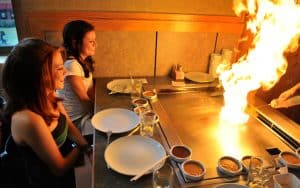 I’m a pretty adventurous guy, so I’ve definitely had hibachi meals a time or 40. You sit with some friends around a big table and you get dinner made right in front of you. The chef might play up his accent, light things on fire, throw food into your mouth, and a good time is had by all. But for one couple from Texas visiting Tennessee, the meal went beyond light-hearted undertones of racism and overeating, into what they claim was sexual assault.

No pee-pee dolls at the dinner table, please

The Tennessee hibachi restaurant, Wasabi, had its chefs use a toy to squirt water on diners while they ate. plastic doll came equipped with shorts, which when pulled down, led to a stream of water being shot from the doll’s, “delicates.” The whole effect made it seem like the doll was peeing on the diners. (in a playful way, of course). The doll didn’t have any defined anatomy, so just imagine a Ken doll peeing across a table of flaming food.

Isabelle Lassiter, her husband, children, and grandchildren were out to eat at the hibachi restaurant when their chef used the pee-pee doll to shoot water at Mrs. Lassiter. Both she and her husband were immediately upset; they didn’t feel this was appropriate behavior in front of their grandchildren. As we all learned from R. Kelly, peeing on another person could be perceived as sexual harassment, so the Lassiters first called 911 and then filed a sexual assault claim with the local police.

It’s easy to stand back and point fingers at people who take things way too seriously, but this case irks me for a lot of reasons. First of all, without resorting to boring explanations of cultural differences that have been sanitized for literal American consumption, this lawsuit has a very tiny foot to stand on. A report was filed, but no arrests have been made. No arrests are likely to be made. So, instead of using the criminal justice system as it’s intended, we’re tied up with a lawsuit because someone’s grandma can’t take a joke.

Second is the Lassiters’ inability to understand that dolls do not act on their own except in movies. During the 911 call, Mr. Lassiter said “…at the end of the meal, the chef pulled out a doll, he had his pants pulled down, and it shot water on my wife out of its (censored).” While Mrs. Lassiter claimed the doll assaulted her, it’s obvious she really meant that the chef had assaulted her. Dolls don’t sexually assault people; people sexually assault people. And sexual assault by another person isn’t funny – it’s a serious crime with serious fines and punishments if you’re convicted.

Third, and perhaps most importantly, people’s lives have been ruined by sexual assault: both those who were victims of an attack, and those who have been falsely accused of committing a crime. I mean, sure – it’s possible that the doll was filled with pee. But it wasn’t. It was water. I know it was water, because even though I wasn’t there, no one – not even the Lassiters – smelled, saw or tasted pee.

And from what I read, the only real assault here was on the doll. Poor little guy got chopped up, and no one even bothered to ask him first.

At Drew Cochran, Attorney at Law, I’m here when you’re facing serious criminal charges. We’ll go through what happened together, and make sure you know exactly what’s going on, in plain English.  Give me a call when you need an Annapolis criminal defense lawyer, 410-777-8103 or complete my contact form to schedule an initial conversation. Just remember: Keep Calm – and Call Drew.