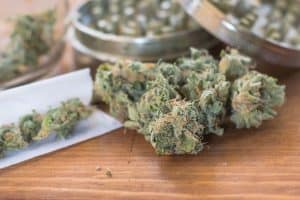 Except when it is.

I ran across this story and almost couldn’t believe one person could make so many mistakes in such a short amount of time. Of course, as the saying goes, “go big or go home.”

Today I bring you the saga of Arielle Bonnici from New York. Ms. Bonnici was on her way to deal with a summons for unlawful possession of marijuana. Pretty standard stuff. She hopped into her Jeep and made her way over to the Northport Village Justice Court complex to answer the summons and, hopefully, put everything behind her and go on to be a law-abiding citizen.

In the first of several missteps, she pulled into the rear parking lot of the building, cutting off an unmarked police car. That got the officer’s attention. Next, she drove into an area marked for police vehicles only and helped herself to a prime parking spot — one reserved for the chief of police. It bears mentioning officers noticed she was chatting on her cellphone at the time.

But why stop there? Officers approached her Jeep, presumably to have a word with her about cutting off a police vehicle, parking in a police lot, and taking the chief’s spot. When Ms. Bonnici rolled down her window, a cloud of marijuana smoke gently wafted out into the officers’ faces. Upon further investigation, although they probably didn’t have to look very hard, officers noticed marijuana and a pipe in her possession.

So, there’s a lot to unpack here. Stated Police Chief William Ricca, who I assume eventually got his parking spot back, “At this point the two officers said they started laughing. Besides cutting off a police car, on the cellphone, parking in the chief’s parking spot, now she’s smoking marijuana in the back of a courthouse and police station.”

Ms. Bonnici received a field ticket in lieu of an arrest for unlawful possession of marijuana, a traffic ticket for using her cellphone while driving, and was taken to the courtroom to answer to the original charge and be arraigned on the new charge. Big day for Ms. Bonnici and the Northport Police Department!

This incident was a textbook example of bad decisions. The myriad traffic violations aside, it’s simply bad form to get caught committing the same crime you’re showing up in court to answer for in the first place. And repeat violations, whether for drug possession or traffic tickets, result in more severe penalties. Don’t let this happen to you.

Obviously this case is extreme, but crazy things happen every day. If you need an experienced criminal defense lawyer in Annapolis, I can help. At Drew Cochran, Attorney at Law, I’ve been helping clients fight drug charges for almost 20 years. Contact me today at 410-777-8103 – or complete my contact form  contact form to schedule an initial conversation. Just remember: Keep Calm – and Call Drew.