How the Fourth Amendment Protects Defendants in Criminal Cases 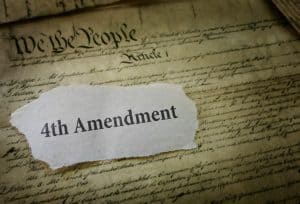 The police just pulled you over and searched your car. Inside they find your stash of weed. Do you have a defense? The police knock on your door without a warrant and ask to search your home. Can you say “no” to the search? The police stop you because you look like someone they’re investigating though there’s no other connection to any crimes. Can you contest the stop?

The answers to these questions are generally determined by the Fourth Amendment to the US Constitution provides. The Fourth Amendment provides “The right of the people to be secure in their persons, houses, papers, and effects, against unreasonable searches and seizures, shall not be violated, and no warrants shall issue, but upon probable cause, supported by oath or affirmation, and particularly describing the place to be searched, and the persons or things to be seized.”

The Fourth Amendment is primarily used by criminal defense lawyers during suppression hearings. The lawyers use it to suppress evidence that could harm a defendant that wasn’t properly obtained. The doctrine that governs the admissibility of evidence is called the “exclusionary rule.” This rule was enacted, according to the Legal Information Institute, to prevent “the government from using evidence gathered in violation of the United States Constitution. The decision in Mapp v. Ohio established that the exclusionary rule applies to evidence gained from an unreasonable search or seizure in violation of the Fourth Amendment.”

The exclusionary rule places the burden on law enforcement to either get a warrant before conducting a search or a seizure or on showing the search, under the circumstances was reasonable. Reasonableness generally means that there is some established exception to the requirement to obtain a warrant. Warrants usually aren’t needed if the search is incident to a lawful arrest, stop and frisk for weapons searches, and other legal searches. Most car searches don’t need a warrant on the argument the driver will drive away.

The police argument that police seized the evidence in good-faith may be a valid response. Defense lawyers argue that courts should exclude evidence, even if the police acted in good faith, because police always say they acted in good faith. The reason the good-faith exception shouldn’t apply, defense lawyers say, is that bottom line – it’s not that hard to get a warrant. Go before a judge, present the facts to support a claim of probable cause, and ask the judge for a warrant. This way the judge can be an objective decision.

Some of the interpretation of the Fourth Amendment is evolving as technology provides for different ways to conduct searches and the items that police want to search are on smartphones, laptops, and other electronic devices.

At Drew Cochran, Attorney at Law, our criminal defense lawyers often file motions to suppress evidence because it was obtained in violation of the Fourth Amendment or in violation of other laws. If evidence of a crime is suppressed, then there’s a good chance the charges will be dismissed or the charges can be reduced – depending on what other evidence the prosecution has. To speak with an experienced Annapolis, Centreville, and Ellicott City lawyer, call us at 410-271-1892, or fill out our contact form – to speak with a strong advocate.