Getting a BWI Is a Big Oar-deal 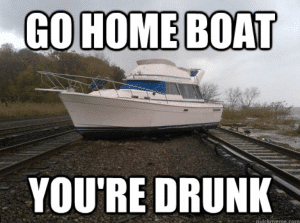 See what I did there?

Whatever. Dad jokes are funny.

Being charged with and arrested for BWI is not, though. Boating while under the influence is a serious offense. In fact, the laws got a little stricter on October 1, 2019, in Maryland for repeat offenders.

It doesn’t matter if you’ve been pulled over on the highway or stopped by the state police on the waterways of Maryland, a repeat DUI offender will now face much steeper penalties. The new penalties are as follows:

The latest data available for boating accidents related to alcohol from the United States Coast Guard is for the 2018 calendar year. These statistics were released in August 2019. According to the data, 10 accidents involved alcohol use; 5 people were injured, and 5 people died.

When you compare these numbers with those from 2017, there are some differences. There were 16 accidents caused by alcohol use that year, with three deaths, and 17 injuries stemming from those accidents. 2015 was the deadliest year of the last four years in Maryland with eight deaths attributed to alcohol use while boating.

If you are planning on buying or renting a boat in Maryland it’s imperative that you understand the state’s boating laws. Some of the most important boating laws on the books include the following:

Facing charges of DUI for the first, second, third, or subsequent time is not easy. It’s a difficult situation to be in and one that can lead to the loss of your license for the rest of your life. You might also have difficulty holding a job. It’s imperative that you speak with an experienced Annapolis DUI defense attorney about your case from the office of Drew Cochran, Attorney at Law. We also have an office in Ellicott City to better serve you. Call our office at 410-271-1892 or complete a contact form to schedule a consultation.