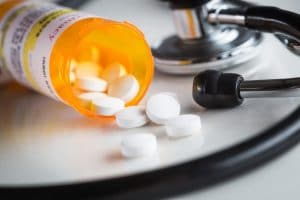 A pharmaceutical sales rep from New Jersey and a doctor from Florida are just two of dozens of people who have been indicted in a nationwide prescription fraud case. More than $2.5 million was defrauded by these two from the New Jersey state health benefits program and other insurance companies. The accused are Keith Ritson, 40, of the Bayville section of Berkeley Township, and Dr. Frank Alario, 63, of Delray Beach, and they were indicted on 16 counts.

(Anyone surprised that either Florida OR New Jersey popped up in this story? No? Let’s continue.)

The two men face the following charges, according to the Press of Atlantic City:

The scheme centers around a pharmacy in Louisiana that has since closed. The pharmacy, Central Rexall Drugs Inc., would provide unnecessary and expensive compounded medications for people who were recruited by Ritson and Alario. The CEO of the pharmacy, 37-year-old Hayley Taff, entered a guilty plea in August to one count of conspiracy to commit health care fraud.

Ritson was accused of recruiting people who were issued prescriptions by Alario without Alario examining them, speaking with them, or even establishing a doctor-patient relationship. U.S. Attorney Craig Carpenito issued the following statement in a press release: “Ritson and Alario earmarked established patients of Alario’s medical practices who had insurance that covered the expensive compound medications. Alario prescribed the medications not for the patient’s need or request, but for the benefits he and Ritson stood to gain.”

Ritson was paid a percentage of money that the pharmacy made from every prescription issued by Alario. Ritson then paid off Alario with transportation, free meals, and entertainment to continue to scheme.

A second scheme mentioned in the indictment revolved around the pair accessing medical information of patients to find out the insurance coverage they had. Per the release, “Ritson also had access to parts of Alario’s office where patient information was stored or could be heard and observed, including employee-restricted areas with medical files, fax machines and computers.”

I can crack all the jokes I want about this, but prescription fraud is a serious crime. If convicted, you will go to prison. You will lose your license to practice. You will lose some of your Constitutional rights. You will be fined $15,000.

Conspiracy, money laundering and fraud that crosses state lines? Now you’re looking at federal charges, and the feds don’t play. They’ll hit you with multiple counts and punish you for all of them. These two dopes are facing decades in prison, and potentially millions in fines: “All of the offenses also are each punishable by a $250,000 fine, or twice the gross gain or loss from the offense, whichever is greater.” And that doesn’t count restitution, either.

That’s why you should contact Drew Cochran, Attorney at Law IMMEDIATELY if you’re charged with prescription fraud or running an interstate drug ring. There’s a lot at stake. Call our office at 410-271-1892 or complete a contact form today. We have office in Annapolis and Ellicott City, and represent clients across Maryland.