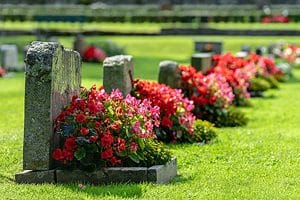 And yet, here we are.

Mr. Joseph Stroud, 79, has been accused of desecrating the grave of a long-time foe with dead animals in Bentonville, Arkansas. According to the family of Fred Allen McKinney’s – he’s the long-time foe, in case you’re playing the home game – more than 16 animal carcasses were left on the grave along with a vase that had eight live possum babies in it. The headstone is all stained now and it can’t be fixed, so the family is probably going to seek the $2500 replacement cost as part of a lawsuit. Or, the judge may order Mr. Stroud to pay for it.

There is nothing about this story that isn’t amazing: a long-time foe, a bunch of live possums (did you know a group of possums is called a “passel”? Well, now you do), dead animal stains on a gravestone. If this doesn’t scream “Mini-Series Where Cub Reporter Investigates Odd Death in Faraway Town and Is Treated To Local Lore,” I don’t know what does.

And it’s about to get better.

How did the catch the guy?

After finding dead animals on multiple occasions on the grave of their loved one, the family of McKinney asked the cemetery if they could install game cameras to find out what was happening. At first thought, the family suspected that the animals were dying after eating fake flowers left on the graves.

The game cameras caught something more than just animals wandering around the cemetery. What they found was someone pulling up in a Dodge Journey, getting out dressed as a woman, and leaving dead animals on McKinney’s grave. Stroud would don sunglasses, a woman’s wig, and a jacket to disguise himself. (Cue the Scooby Doo music.)

The granddaughter of McKinney recognized Stroud as a neighbor with whom her grandparents (McKinney) often feuded. When the police went to his home, a towel stained with what looked like blood was found in the Dodge Journey. Stroud was eventually charged with defacing objects of public respect. He has publicly denied the charges levied against him, claiming that he was only at the cemetery to visit his wife.

So, what if this had happened here? Well,  § 10-404 of the Maryland Code of Law calls for the following penalties if convicted of desecration of a grave, destruction of funerary property, or indecent conduct in a cemetery:

The animal issue is slightly different.

Under § 10-604, for abuse or neglect of an animal comes with a misdemeanor charge and imprisonment not exceeding 90 days or a fine not exceeding $1,000 or both. (Aggravated cruelty is a felony, BTW: up to 3 years in prison and up to $5000 in fines, if convicted.) It doesn’t matter if the animals are domestic or not; you’re just not allowed to hurt them. Since the passel o’ possum didn’t seem injured, he might not face any charges for this at all. But you all know how I feel about people messing with animals, so frankly? I kinda hope they don’t let that part slide.

We fight for those charged with crimes in Annapolis, Ellicott City, and throughout Maryland at Drew Cochran, Attorney at Law. If you are facing any type of criminal charge, including desecration of a grave or animal abuse, don’t be afraid to schedule a consultation. Call our office 410-271-1892 at or complete a contact form today.