There’s a Pandemic. Stop Breathing on Each Other. 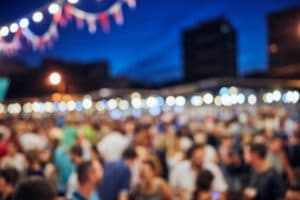 COVID-19 is deadly, and it’s airborne. If you’re hacking and coughing on people, they’re gonna get it. If you’re talking to someone and there are “droplets” in the air, you’re gonna get it. It spreads fast and it spreads easily. For these reasons, the Centers for Disease Control and Prevention, generally recommends that when people are in public spaces or with other people that they wear masks, keep their social distance (six feet or more), and consider wearing gloves.

Which is all well and good if you live in Maryland. (It’s less good if you live elsewhere, since every state is just doing whatever the heck it wants.) Here, we have all sorts of laws and Orders and other regulations against large crowds – not that it’s necessarily stopping people.

According to the Baltimore Sun, a Maryland man threw a rager and refused to break it up, so he was sentenced to jail for one year for violating the state’s ban on big gatherings. The man was sentenced by a state district court judge after a trial without a jury.

The man was charged with violating Maryland Governor Hogan’s executive order, which limited gathering to 10 people or fewer. The judge added another three years’ probation to the sentence. The defendant held a party on March 22 where there nearly 50 people at the party. After pressure from the police, he disbanded the party. He then held a second party and bonfire less than a week later – where he refused the order to disband the gathering.

Subsequently, some orders have entered new stages allowing for the opening of some businesses. Outdoor weddings with social distancing are permissible. In addition, “venues (including religious facilities) can host at 50 percent occupancy based on their fire code certificate.”

There are COVID-10 executive orders that everyone in Maryland needs to follow. Otherwise, you could end up going to jail for a party, for Pete’s sake. Which is silly. It really is.

But if you throw a party and you get busted and you don’t want to go to jail, then you should hire a defense lawyer. I recommend that you hire me, specifically, in case you’re wondering. To do that, call my law firm – Drew Cochran, Attorney at Law – in Annapolis or Ellicott City 410-271-1892 or fill out our contact form to schedule an appointment.