Global Effort to Bring Down Organized Crime? There’s an App for That 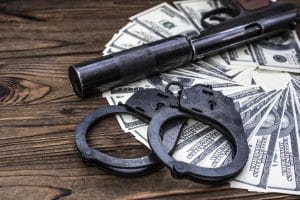 If you’re a regular reader of this blog, you know how much I love a good cop procedural, and movies about criminal shenanigans. I’m especially fond of The Sting, because you can’t put Redford, Newman, and Shaw in a movie and NOT have it be wonderful.

So in case you were wondering, heck yeah I’m watching this story about ANOM unfold with my popcorn at the ready.

For those of you who may not know what ANOM is (and if you don’t, I say there’s a good chance you might not ever need the help of lawyers like me), it’s a closed encrypted communication app that, as the Washington Post puts it, “appeared to be designed for illicit use.”

And boy, did they get that right, because it WAS designed to be used by criminals. We know that, because officials from the US and Australia are the ones who designed it as part of a global sting operation to take down criminal enterprises.

And it WORKED. Per CBS News:

About 9,000 officers have been deployed worldwide to make arrests and search more than 700 locations over the past 48 hours, according to the FBI and the U.S. Attorney’s Office for the Southern District of California. More than 32 tons of drugs — including cocaine, cannabis, amphetamines and methamphetamines — were seized along with 250 firearms and $48 million in various worldwide currencies, the FBI said. More than 50 clandestine drug labs have been dismantled — including one of the largest clandestine labs in German history — and 800 people have been arrested in total, including 500 in the last 48 hours, according to U.S. officials.

How did the ANOM sting work?

The FBI and the Australian government cooked up the plan (called Operation Trojan Shield and Special Operation Ironside, respectively) and put it into place over the last couple of years.

Court docs filed by the FBI said that ANOM came pre-installed on phones that you could only get through the black market. They were pricey – about $2000 for a 6-month contract – but I guess if you’re a drug kingpin, that’s not so much. In order to buy one, though, you had to get approval from another ANOM user, which made people feel safe. So if Don Mortadella had an ANOM-enabled phone, and Capo Brasciole wanted one, too, then Capo B would have to get Don M’s approval in order to be allowed to purchase one. (Australian authorities said the phones were popular because “high-profile underworld figures, described as ‘criminal influencers’” vouched for them, and that may be the greatest worst job title I’ve ever heard.)

This is a particularly neat trick, for a few reasons:

Why isn’t this sting considered entrapment?

Because no law enforcement officials forced these criminal kingpins to commit any crimes; they just provided the means to monitor the criminals while they worked.

The difference between a legal sting and an illegal act of entrapment is slight and nuanced. It mostly has to do with how the crimes originate. A sting provides the opportunity to commit a crime; entrapment induces a crime that may otherwise have not been committed.

For example, say you want to see if your toddler will eat a cookie before dinner, even though you told him he wasn’t allowed to:

In this case, law enforcement got the smugglers and traffickers to use an app that would allow for LEOs to monitor their activities. They didn’t induce them to smuggle or traffic. In fact, based on what I’ve read so far, this is one of the cleanest stings I’ve seen in years.

What will happen to the people who were arrested?

Depends on the country. Because our FBI was involved, anyone who was arrested by the FBI will face federal charges in the US and may need to be extradited here. Others will face various charges in their home countries (or others). Some may not be charged at all, if they are able to work out an immunity deal in exchange for bigger fish, as they say.

What’s the difference between federal charges and state charges?

Can you be charged by the state and the federal government with a crime?

Yes, you can – and no, it’s not considered double jeopardy. The states are considered sovereign entities, so technically, you can be charged by both governments for the same crime. Usually, the feds take precedence, though.

So if you are caught selling…. Oh, I don’t know – 32 tons of drugs, maybe? – in Maryland, and you trafficked those drugs from another state or overseas, then the feds will swoop in, claim jurisdiction, and charge you with drug trafficking. They can also charge you if you get busted selling drugs/ driving drunk/ engaging in other illegal activities on federal land, like a national park or at a federal building.

Understand that federal charges are a big deal. If you’re convicted, it’s on your record for life unless you get a Presidential pardon.

Luckily for all of you, I happen to be licensed to practice in State and Federal court, including the US Court of Appeals. So no matter what charges you face, I’m your guy. Call Drew Cochran, Attorney at Law at 410-271-1892  or fill out the contact form to schedule your consultation with a criminal defense lawyer in Annapolis or Ellicott City today.