Touch Your Nose and Point Your Toes: The Problem with Field Sobriety Tests 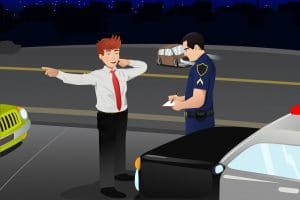 Let’s say that you’ve never been pulled over for a DUI, but you’ve seen it happen on TV, in film, and in ads. Goes something like this, right?

What about the nose-touch FST?

Ah, that one. Turns out, that test isn’t standardized by the NHTSA, so it probably won’t hold up. Other non-standard FSTs include:

And do you know why those aren’t standardized?

Because they’re even less accurate than the standard FSTs, which aren’t all that accurate, either.

How accurate are field sobriety tests?

They’re not, which is why cops always administer more than one test – because any given one of these standardized tests is inaccurate on its own, so the powers that be think the answer is to just give MORE inaccurate tests and average out the responses. And there are a lot of reasons why these tests are not accurate, so let’s take a look at a few of them now.

When officers are taught about FSTs, they’re taught in a controlled environment, like a classroom or a conference room. These places are well-lit and free from visual noise. When you take an FST, you do so on the side of the road (usually at night) where they could be cars flying by with their lights on. You might have to take them in the rain or the snow, in the extreme cold or the extreme heat, or in a place with uneven terrain, making them virtually impossible to “pass.” It’s really easy to see if someone’s drunk if they’re stumbling around in a classroom. It’s less easy when you’re trying to do a WAT on the shoulder of 450.

Every driver is different

The problem with standardized tests of ANY kind is that they assume there is a standardized test taker. But we all know that’s not the case. Some people are a little clumsy. Some people have health conditions that preclude them from being able to stand on one leg, or affect how their eyes move. An inner-ear infection can cause your balance to be off, leading you to fail almost every test they give you. People react differently to stress, too, which means someone who is perfectly capable of doing all of these things could fail a test easily.

Probably not. And my guess is that most police aren’t trained to know that, either. They’re not scientists or doctors, and the chances are pretty good that they’re not experts in ophthalmology, so how can they accurately diagnose or explain the root cause of a failing HGN?

Should I refuse to take a field sobriety test if I’m pulled over for DUI?

In order to get pulled over for a DUI, the cops have to suspect you of driving drunk, right? And they make that determination based on, what – only yielding at a stop sign? Having a blinker out? I’m not saying you should do either of those things, because they’re both traffic violations, but they’re hardly indicators of being drunk behind the wheel. What they are, are “probable cause” to pull you over, which can lead to an officer asking you to step out of the car and take a field sobriety test.

But won’t I lose my license?

For refusing an FST? No, you won’t. And you have the added benefits of not giving the officer any additional ammunition in his case against you.

You can temporarily lose driving privileges for refusing a breath test, yes, but if I’m honest? You’re better off. A suspended license is better than a DUI on your record. It’s cheaper, too. And without the results from those tests, the cops are going to have a MUCH harder time making their case against you.

You, on the other hand, will have me to defend your choices, and to fight back against your charges. I’ve been doing this a long time, so I know what types of defenses are most effective in any given scenario.

At the end of the day, field sobriety tests aren’t accurate and sometimes they aren’t admissible, but you will want an Annapolis DUI defense lawyer (like me!) on your side if you get pulled over. Contact my office –Drew Cochran, Attorney at Law – in Annapolis or Ellicott City by calling 410-271-1892 or filling out this contact form.