Domestic Assault in Maryland: No Takesies-Backsies 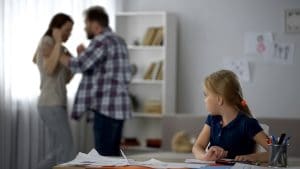 While there’s no such thing as a crime that the law is stoked you committed, there are certain crimes taken more seriously than others — and not just in the obvious “murder is worse than shoplifting” way. Some crimes carry moral weight to them. In other words, if you’re suspected of committing them, you are automatically seen as an immoral person who should be treated as such. These consequences usually extend beyond just going to prison and being fined (not that either of those things are easy or fun) and include things like preventing you from getting hired, approved for housing, making friends, and so on and so forth.

Domestic assault is one of those crimes. The idea that you might have intentionally hurt your significant other is reprehensible to most in an unforgiving way, which means your side of the story stops mattering even if you didn’t actually do it. Law enforcement handles accusations of domestic assault differently than other violent crimes, and they require the least amount of evidence to do so.

Basically, you need a lawyer, stat, if you’ve been accused of domestic assault. Even if it didn’t happen and even if your partner recants her statement because it was the heat of the moment, you can still find yourself in some serious hot water.

Your ex recanting their abuse accusation will not save you

Yeah, this can be confusing, but it sure is the truth. When someone formally accuses someone else of domestic assault, it may not matter if they take it back. This is because it’s the prosecutor who files the actual charges — not the accuser. The accuser is technically only a witness, and does not have the power to either issue or withdraw criminal charges. So, once an officer arrives on the scene and subsequently makes a report (even if no one is arrested), it’s not always possible to take anything back or stop the investigation. For many, this can be a huge problem, because there are plenty of reasons why someone might unnecessarily call the cops:

In Maryland specifically, you should note that most cops operate under a “preferred arrest” policy, which means if the officer has probable cause (in their eyes) to believe you may be guilty, they will arrest you. They want to arrest you as soon as possible because they are trying to protect your supposed victim from further harm. So, even if they do recant, you’re already arrested and already in trouble and it won’t actually stop anything anyways.

Claims of domestic violence can result in more than jail and fines and public scrutiny; they can also result in protective orders that get you removed from your home, away from your children, and probably out of your job. They are serious. Seriously, these claims are serious. So, once more with feeling, you need to GET AN ATTORNEY. Even if you know you’re innocent and even if you know your partner regrets the accusation, get yourself an attorney as soon as the police are involved. All eyes will be on you, just waiting for you to slip up somehow and incriminate yourself further so they can punish you more. They expect you to be guilty and no, it’s not fair, but it is what happens. Do not. Be. A. Lobster.

Once you’ve hired an experienced domestic assault defense attorney, you have a chance, because what you need is a rigorous, tailored defense to prove your innocence. He can build up your case to make it as strong as possible while also manipulating any and all weak points in the prosecution. The idea is to work within the law until it is on your side, and that is no easy task for something taken as seriously as domestic assault — especially because cops require such little evidence to put you in this situation.

And let’s say you did it. Let’s say you actually did do it, which makes the whole situation even more terrifying to go to. Whatever the case may be, there are still defenses available as long as you hire the right people to deploy them for you. For example, if you have an addiction disorder or PTSD, you might be eligible for treatment programs in lieu of time behind bars. If it was out of self-defense, arguing for lesser or dropped charges might actually be a possibility.

Nothing is a guarantee in law, but probability sure plays a hell of a role. The choices you make early on heavily affect your chances of proving your innocence, regardless of whether or not you did it, and regardless of whether or not your partner regrets accusing you. In other words, the sooner you hire an attorney, the sooner they can start helping you and strengthening your defense. The longer you wait, the closer you get to being straight out of luck.

Don’t be a lobster. Domestic assault cases are fickle, complicated, and serious things that require precision, skill, and education to navigate. If you have been accused of domestic assault on any level, you need to act now to protect your rights — and your freedom. Luckily, the Annapolis domestic assault defense attorneys at Drew Cochran, Attorney at Law are here to help when and where you need us. With an additional office in Ellicott City, we’re seriously prepared to deal with your serious problem. Get started today by calling us at 410-271-1892 or using our contact form.