What Happens if I Get Arrested at a Protest? 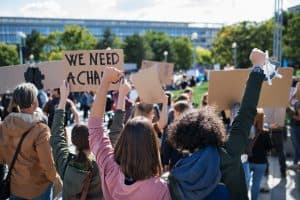 People go to protests to speak their mind and be heard on issues that are important to them. Okay, okay, most people who go to protests are there to promote change. Others are there for personal curiosity and to maybe mix it up with protesters. Part of the problem is that police rarely know exactly who instigated an incident until well after arrests are made. They’re just concerned with getting crowds under control if a fight or other less than peaceful activities erupt.

You have a right to peacefully assemble but you’ve also seen enough news reports by now to know that it’s easy to get swept up in angry crowds where people are committing assault or even being arrested for burglary depending on what’s gone down. So before you get arrested for something that you may or may not have done during a protest, you need to know where you stand.

There are tactics that you can take to minimize the likelihood of you being arrested, and to protect yourself if your plan fails. That means take pictures or better yet, video, to use as evidence when possible. It can help show anything from your location to who you were with. Primarily you want to make sure that you know whether you are protesting on public or private property, and that you have proper permission to be there.

The most likely charges you’ll face from protesting

There seem to be standard protest crimes that you can expect to be charged with if you are arrested. Don’t panic but comply with the officer until you are able to get your own backup by way of an attorney.

You could be looking at fines or other penalties, including jail time for:

If you were careful to follow the advice above, at the very least you can try to use the evidence you collected to prove that you didn’t do what you were being accused of when police slapped the cuffs on you-assuming they told you. Be sure to get names and badge numbers!

Protect yourself after you’ve been arrested

The three best things you can do for yourself if you’ve been arrested are to:

In addition to bail bonding companies, there are bail funds that you may qualify for, such as:

The longer you remain in police custody the longer they have to get you to slip up and do or say something that can be leveraged against you. It also delays my ability to gather evidence that could disappear and find witnesses who have scattered.

To help yourself or a loved one who has had a brush with the legal system after a protest, hire the criminal defense attorney who is most concerned about protecting your rights and freedom. Hire the aggressive legal representation you need with Drew Cochran, Attorney at Law. I have offices in Annapolis and Ellicott City, in addition to serving Centreville. To schedule your free consultation, call me today at 410-271-1892, or reach out to me through my firm’s contact page.