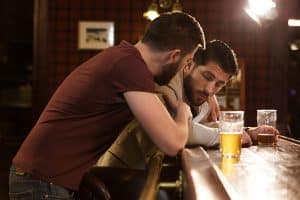 In a study that will shock precisely no one, research has determined that people who are drunk do not realize they are drunk while they are, you know… drunk. The study, which was conducted by the Department of Experimental Clinical and Health Psychology at Ghent University in Belgium and reported in the Journal of Safety Research in June 2022, sought to determine the possibility of identifying which intoxicated individuals are at risk of drunk driving.

In fact, this is just one of several studies that have revealed similar findings regarding drunk people’s awareness of their intoxication level. A 2016 study published in BMC Public Health, for instance, showed that in social situations, drunk people frequently underestimate their own level of intoxication compared with the other drunk people around them. They also underestimate the associated risks of being intoxicated. As we all know, a drunk person who thinks they’re “just fine” and “OK to drive” may, in fact, be entirely too impaired to safely and legally operate a motor vehicle. The study indicated that introducing sober people into the situation may help make intoxicated people realize just how drunk they really are. (I’m not really sure how much fun that potential solution will be for the sober people, but anything for the public good, right?)

Now, who among us hasn’t had a friend or loved one or– ahem – perhaps even ourselves, confidently insist that they are “not that drunk” when clearly, they are really, really drunk? While these studies are not exactly groundbreaking to anyone who has ever had a few too many drinks or knows someone who has, the research does confirm that we are right to take a drunk person’s keys away from them or to hand over our own rather than trusting them or ourselves behind the wheel after a night out.

As a DWI/DUI defense lawyer in Annapolis, I’ve seen what can happen when people overestimate their own sobriety and decide to drive home rather than calling a cab or a friend. Even a night that doesn’t end with a trip to the emergency room – or the morgue – can still end in a jail cell.

What should you do if you’re stopped for DUI in Annapolis?

Let’s say you’re out with your friends, having a good ol’ time. Maybe you’re with the guys watching the game, or having a few drinks after work, or maybe it’s a girls’ night out or date night for you and your partner. Regardless of the circumstances, at some point it’s time to head home or off to your next destination. If you’ve been drinking and you get behind the wheel, you run the very real risk of injuring or even killing someone else, injuring or killing yourself, or doing some serious damage to your own or someone else’s property. At the very least, being pulled over or stopped by the police and failing a field sobriety test could result in a driving while intoxicated (DWI) or driving under the influence (DUI) charge – even if you escape without hurting anyone.

If you are stopped on suspicion of driving under the influence, you are required to cooperate with the police, but only up to a point. As with any traffic stop, you must pull over for the police and provide your license and registration to the officer when they ask for it. Based on their observations of your driving and your demeanor after they pull you over, the officer may ask you to step out of your vehicle to perform a field sobriety test. There are three standard field sobriety tests that are typically used in Maryland. The first involves having you walk and turn, the second requires you to stand on one leg, and the third involves the officer checking your eyes with a flashlight and observing the horizontal movement of your gaze.

An officer may also ask you to submit to a breath test. Although we have “implied consent” here, you do have the right to refuse. This includes refusing to participate in a breath test if you are taken to the police station based on the officer’s observations. Without knowing your actual blood alcohol content (BAC), the prosecution only has the officer’s observations to go on to prove their case. This is especially important when determining if you will be charged with DWI or DUI.

What if you’re arrested for a DWI or DUI in Annapolis?
If you or someone you care about is arrested on suspicion of DWI or DUI, your first call should be to a skilled Annapolis DWI/DUI defense lawyer. These charges can be serious – especially if it is not your first offense – and you need a criminal defense attorney on your side who understands how to build a solid defense and, just as importantly, how to pick apart the prosecution’s case piece by piece. As an experienced DWI/DUI defense lawyer, that’s exactly what I do for my clients.

If you or someone you care about has been arrested for a DWI or DUI in Maryland, I can help. Contact my office, Drew Cochran, Attorney at Law, in Annapolis or Ellicott City by completing this form.